The Test of Time

One of the more important economic principles we consider in real estate appraisal is the Principle of Anticipation. The notion that markets are forward looking. To do it well, you better have a good crystal ball!

Back in the Spring, I posted a few comments on biofuels and grain prices, in which I predicted that grain prices (which drive land values) would likely start to track with the pump price of petroleum based fuels. The rationale being that we now have enough refining capacity to suck the entire domestic grain production out of the market and use it for biofuels (ethanol and biodiesel) if those products are competitive with pump prices of transportation fuels. At the time that piece was written, grain prices had soared to heights far greater than anything the livestock and export markets had been able to support.

Well the summer has passed, so lets take a look. What follows are two charts….November Heating Oil (another name for which is #1 diesel….a good barometer of #2 diesel) and November Soybeans. Again, my prediction was for grain prices. The real product being soybean oil, but all of those are part of the soybean complex, which tracks together. The Charts (click to enlarge): 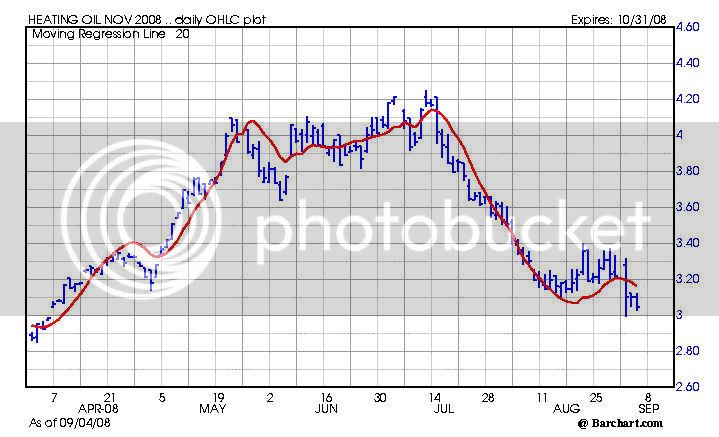 The red lines are moving averages. While it could be coincidence, the rise of both markets beginning in April, the tracking of the movements, the similar 1-2-3 tops and near simultaneous drop in mid July, and the little whipsaw bounce in the last few weeks seem to me to take the coincidence out of it. Looks to me like these markets are tracking very closely.

So going forward, until substitutes are found for biofuel feedstocks, keeping an eye on the direction of crude oil may be a good indication of where the grain markets are going (baring a disaster like an early frost). These charts do appear to support the notion that the pump price of transportation fuels sets an economic cap on biofuels and that this remains greater than what the alternative markets (like our livestock industries) can support.